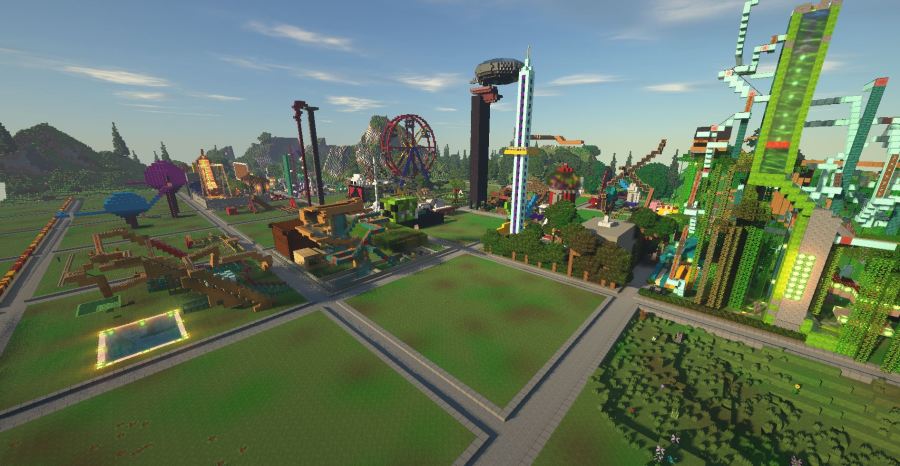 The start of every month brings a new, month-long, themed Creative mode build competition. We give out prizes to the top three entries, as well as Emerald Points.

With 15 points for a win, 10 for second and 5 points for third, these get tallied up each month. Seasons go for 6 months – January to June, and July to December. Whoever has the most points at the end of each season takes home some prizes! But that’s not all.

At the end of each month, the month’s winner will get some in-game loot – four Diamond blocks for a win, three for second, and two for 3rd. There’s also a Mega Crate Key for each of the top three, plus a custom trophy.

After 3 months, we give away some JB HiFi vouchers to the three players with the most Emerald Points.

At the end of the 6 month season, there are the grand prizes – gear like LEGO, gaming keyboards, mice or monitors for the winner, and vouchers for second and third places.

Each player gets a single veto option per season. What does that mean? If you see a theme that you’re really struggling with and don’t know what to do for it, you can use your veto and build whatever you want. If you have already used your veto during that season, you can’t use it again. It’s once per season.

To claim your veto and do your own theme, you need to send a mail in the Creative server to JohnsanGeezo (/mail send JohnsanGeezo [message]) saying you’re using your veto. We’ll then put a crimson Nether sign on the plot border saying your veto has been claimed.

Run around the map – as you run, the blocks behind you will disappear. Make sure you don’t fall down! There are multiple levels – reach the bottom and you’re out.