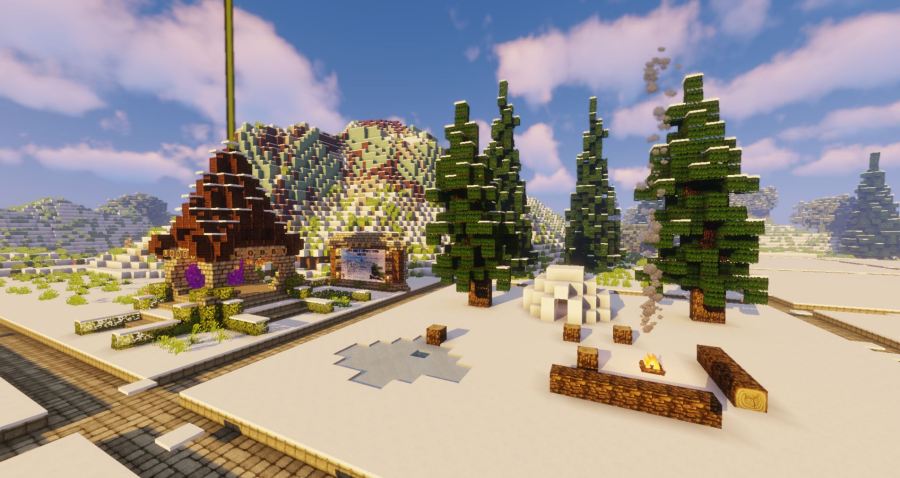 We’ve got one week until the end of May, so it’s time to finish off the treehouses and get stuck into the next Emerald Points build challenge – Winter!

After the May competition has been judged by the moderators, we’ll be giving away some JB HiFi vouchers to the three players with the most Emerald Points so far – $25 for 1st, and $10 each for 2nd and 3rd. These will be given away at the start of June, to give us time to judge. If we need to do a tiebreaker round, a new competition will be designed for those players to compete in.

Need some ideas? Think about snowmen, winter cottages, winter villages, winter sports, igloos, etc. Get creative! You’ll also notice a bit of a change to our lobby world in June. I wonder what it will be?

Judging will take place during the first week of July. The June Comp world gate – located on the Warp Ship – will replace the May gate which will close to building at 9pm on Tuesday June 30th.

The gate will open on the Warp Ship on the morning of June 1st, so get planning and designing now – you’ll only have a month to build.

Early next week the moderator team will be judging the Treehouse entries, and you can add your votes in too! As the existing gate for the May world will change to June, a new gate for the Treehouse world will be available on the upper deck of the Warp Ship. The Treehouse world will be set to Adventure Mode so no more building will be able to happen, and it will be available for two weeks for players to check out. Voting is done by sending JohnsanGeezo a mail using /mail send JohnsanGeezo.

Players are not allowed to vote for their own entry, and must choose their top 3 builds (you can’t vote for the moderator’s builds). Players are also not allowed to buy or bribe for votes. If you are caught doing this, you will automatically be disqualified from getting Player votes for that month.

The top three entrants in the Players Choice will also get some in-game currency. For more information about the Emerald Points Competition, check out the article all about it!

Get in touch on Discord or in game if you have questions! Happy building…